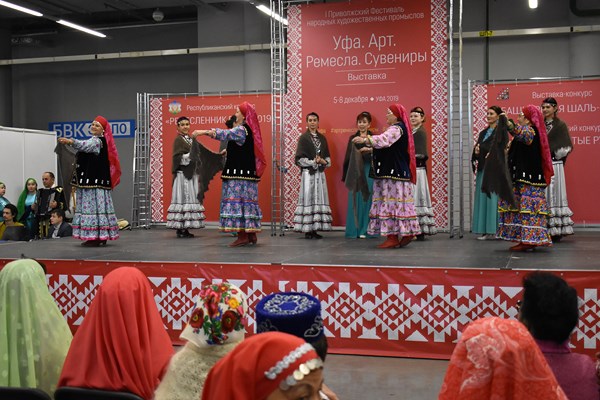 Today, December 5th, the First Volga Folk Crafts Festival, VI Exhibition-Festival “Ufa-Art. Crafts. Souvenirs ”, competition“ Craftsman of the Year - 2019 ”.
The opening ceremony was attended by the Minister of Industry and Energy of the Republic of Belarus A.N. Sheldyaev, the head of the regional executive committee of the United Russia Party, the deputy of the State Assembly - Kurultay RB Akhmadinurov R.M., the Deputy Minister of Culture of the Republic of Belarus Altynbaev R.R., the Deputy Minister Education and Science of the Republic of Belarus Galiev A.Z., Deputy Chairman of the State Committee for Trade and Protection of Consumer Rights Belov V.A., Chairman of the Committee of the State Assembly - Kurultay of the Republic of Belarus for Industry, Innovative Development, Trade, Enterprise to motherhood and tourism Rakhimov Kh.Kh., head of the consumer market, tourism and consumer protection department of the administration of the city of Ufa of the Republic of Belarus, L. Makshukova, chairman of the board of the Association of Folk Art Crafts of Russia G. Drozhzhin, director of the Republic of Belarus Agency for development of small and medium-sized enterprises Gareev I.A., general director of the Bashkir exhibition company A.V. Kildigulova
Also attended were delegations of municipal districts and urban districts of the Republic of Bashkortostan and other constituent entities of the Russian Federation.
Recall that more than 350 craftsmen and craftsmen from 57 districts and cities of our republic and 16 regions of the country take part in the events.
The exhibition fair will last until December 8th. Here you can not only acquire unique folk art objects, but also become a spectator of performances by folklore groups, take part in master classes, vote for the best works of the Art-Yolka contest.